It’s never a bad idea to start out a new year with a few extra good karma points… you never know when you’ll need them. So, instead of spending New Year’s Eve drinking too much in a crowded bar and waking up to feelings of pain and regret, I decided to ring it in at Golgulsa, a Buddhist temple located just outside Gyeongju, South Korea.
Templestays have been gaining popularity among tourists and usually involve a short-term stay in one of the 900 traditional Buddhist temples in Korea.  Participants follow a rather strict schedule to experience a day (or two or three) in the life of the monks that reside there.  A templestay was something that had been on my bucket list for a while, so when I found a special New Year’s program on the official Templestay website, I knew I had to sign up. 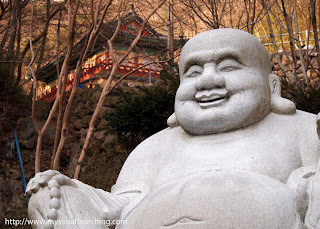 It was about a five hour trek from Seoul to Golgulsa Temple that required two bus trips, a bit of waiting around, and a short walk to the temple grounds from the final bus stop.

Once I had arrived, I was given a brief introduction to the program, a map of the complex, and special clothes that I was to wear during my stay. I was then directed to my room where I would be spending the night with about fifteen other women.

The room was a rather large common area with pillows and blankets spread out on the floor for sleeping. There was a bathroom with a toilet, a few open showers, and sinks that were to be shared.  I’ve become use to this arrangement after living in Korea for a few years but wondered how other Westerners not used to copious amounts of nakedness would handle the situation.

After dinner, my fellow templestayers (there were about 40 of us altogether) as well as some youth camps gathered in the Sunmudo Discipline Center for orientation. We were taught how to breathe, how to concentrate, and how to sit properly when meditating. The great thing about Golgulsa is that the majority of the employees and monks are able to communicate in English, which made things a lot easier for us foreigners unfamiliar with the ways of Buddhism. After a brief introduction, we began evening chanting.
Monks led us in chants, which required a lot of systematic bowing (watch here). We had been given books beforehand with the words of the chants as well as their English translations but I eventually gave up and just enjoyed the rhythmic and hypnotizing sound of the monks’ voices, which eventually readied me for Seon (Zen) meditation, which was next on the itinerary. 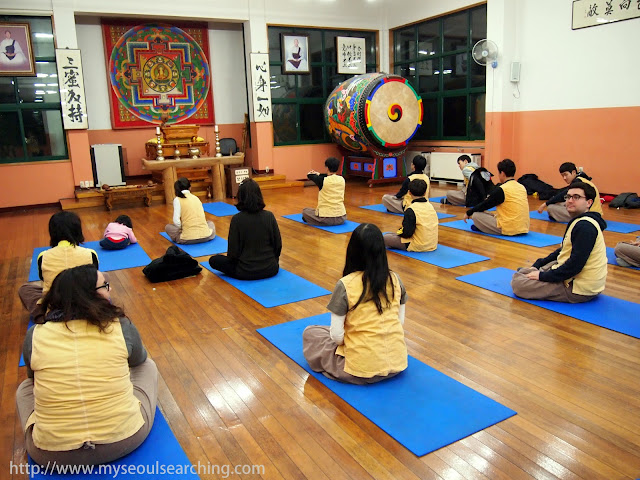 Preparing for Sunmudo training.
Before arriving, I had wondered how I would fare while meditating. I’ve never been good at clearing my mind and sitting still. I had done an afternoon program at Bongeunsa Temple in Gangnam before and found myself moving around every few minutes, peeking through semi-closed eyes to see what everyone else was doing. So, I was quite surprised when a half hour or so had passed and I was relaxed and still in the same position I had started in.

I’m not sure if it was the spiritual setting or my commitment to starting the new year off with a clear, positive mind, but I have to admit that I was proud of myself for maintaining my concentration.

The real fun started when our Sunmudo training began. Sunmudo is a type of Zen martial arts that was once common throughout dynastic Korea when monks often fought as soldiers against invading foreign powers. When Japan colonized Korea, Sunmudo was neglected but was later revived in the 70s. Still, it is not commonly practiced so being able to experience it at Golgulsa, the headquarters of it all, is really something special. 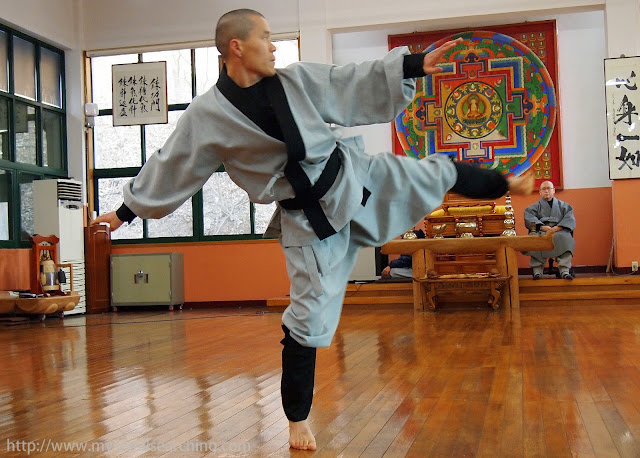 One of the monks gives a Sunmudo demonstration. 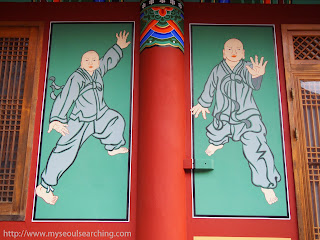 We learned that the foundation of Sunmudo is the way in which one inhales and exhales so a lot of our training revolved around exercises to control our breathing. We did a lot of intense stretching and held our bodies in a variety of positions, not unlike those in yoga.

Eventually, we worked our way up to punching, kicking, then jump kicking. By the end of it all, my metaphorical butt had been kicked and I had stripped down to everything but my undershirt and temple clothes, but felt amazing. There is not a lot of exercise that I actually enjoy or get anything out of; this was one of the few “workouts” I’ve done that I loved.

Although monks usually end their evenings with a set of 108 bows, they would be doing 1,080 while we were there since it was New Year’s Eve. I had every intention of participating. Before the training, that is. I decided to opt out of it and go to sleep, as we were required to wake up at 4am. I found out the next day that most of the monks peaced out after 108 bows so I felt a little bit better for not attempting the feat myself.
My efforts to get to bed early failed when the room full of teenage girls next to us stayed up laughing and screaming. Unfortunately, I ended up only getting about 30 minutes of sleep before arising at 4 to the sound of the monks’ wood clanking around the temple grounds. Buddhist wake up call, I guess.
We started our day with another round of chanting then headed to the dining hall for a bowl of tteokguk (rice cake soup), the meal Koreans traditionally eat on New Year’s Day. 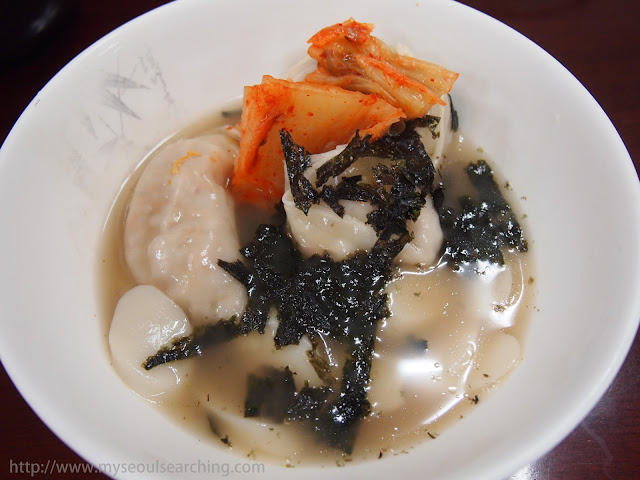 Tteokguk, or rice cake soup, is pretty much an obligatory meal on New Year’s Day in Korea.


We then took a bus to Kampo Beach for another Korean tradition: watching the first sunrise of the new year. When we arrived, daylight had already made an appearance. Steam rose up from the ocean into the frigid coastal air as deep pinks and creamsicle oranges mixed together in the sky above. 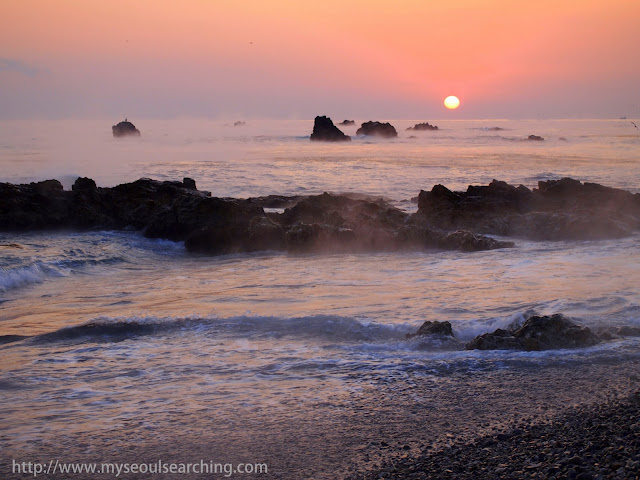 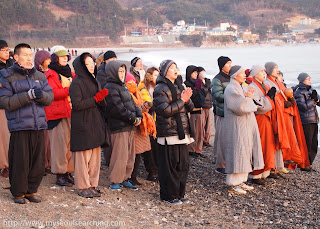 Many families had already gathered around makeshift bonfires, sipping on canteens of coffee and tea. They invited us to join in, which we did while we waited for the sun to rise. Just before it did, we gathered together for some Sunmudo exercises as the monks chanted.

As we went through the fluid movements, the sun began to rise over the horizon in the form of a dripping red fireball. It took its place in the sky while we all stood in awe of the incredible scene in front of us. All of it was extremely cool (except for the weather, which was freezing). Very few times in my life have I been a part of such a beautiful spiritual experience than on this day. 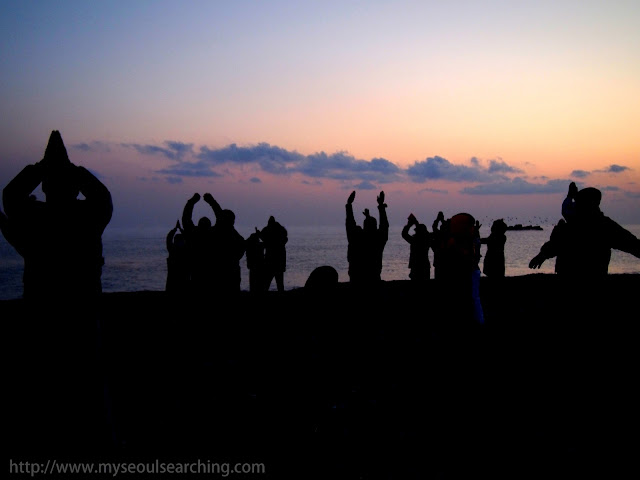 Just before the sun rose, we did some Sunmudo moves while the monks led us in prayer.
After a nap back at the temple, I wandered around the complex with some folks I had met the night before and checked out some of the oldest Buddhist ruins in Korea as well as the only cave temple in the country located next to a giant Buddha carved into a mountain.
We were treated to a very impressive demonstration of Sunmudo by monks who have been practicing the martial art for over a decade.  At one point, I forgot they were monks as some of the moves were contortionist-like. 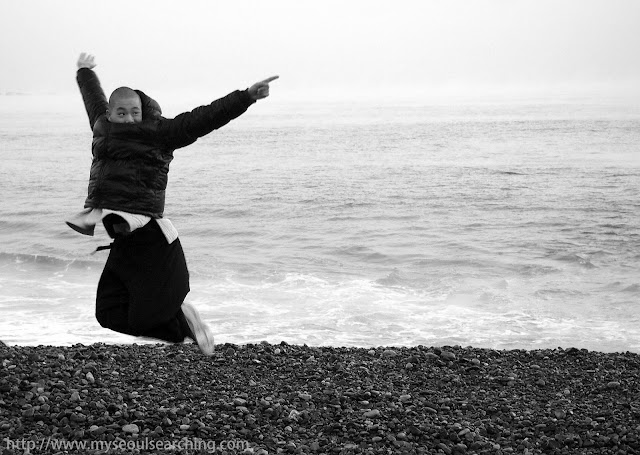 Before departing, we ate a lunch of temple food (strictly vegetarian), not wasting a single bite of it, as required by all Buddhist temples. I was secretly grateful that the community service aspect of the templestay program was not required of us, thanks to it being New Year’s Day.

At this point, my entire body was aching from the previous night’s workout and I can say now that I’m quite confident that I am not cut out to be a monk. But, I’m okay with this, as a day in the life of one was enough.

My templestay at Golgulsa wasn’t exactly the peaceful getaway I had expected, but it was a unique experience for the books. And I picked up at least 20 or so karma points to start off the new year in good graces. 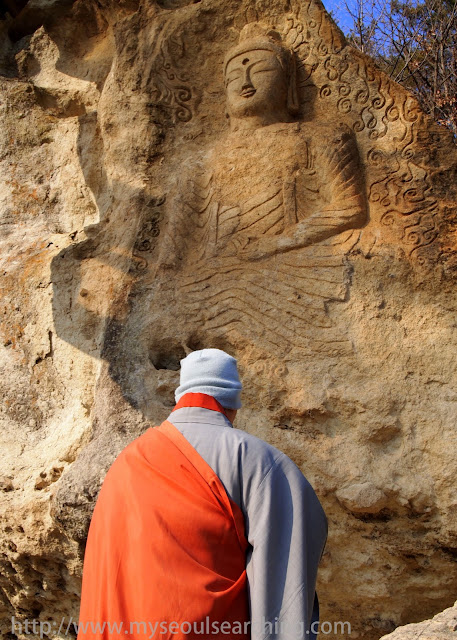 Information: The templestay program at Golgulsa Temple is 60,000 won/night (cash only, payable at check-in) per adult and includes accommodation, three meals, and all activities.  To get there, follow the detailed directions listed on this page.

You can reserve a templestay for this temple and others throughout the country at the official Templestay website.